Incoterms (an abbreviation for International Commercial Terms) are internationally accepted standard trade definitions which describe the selling/buying terms between the shipper and the consignee. Among the best known Incoterms are EXW (Ex works), FOB (Free on Board), CIF (Cost, Insurance and Freight) and CPT (Carriage Paid To). 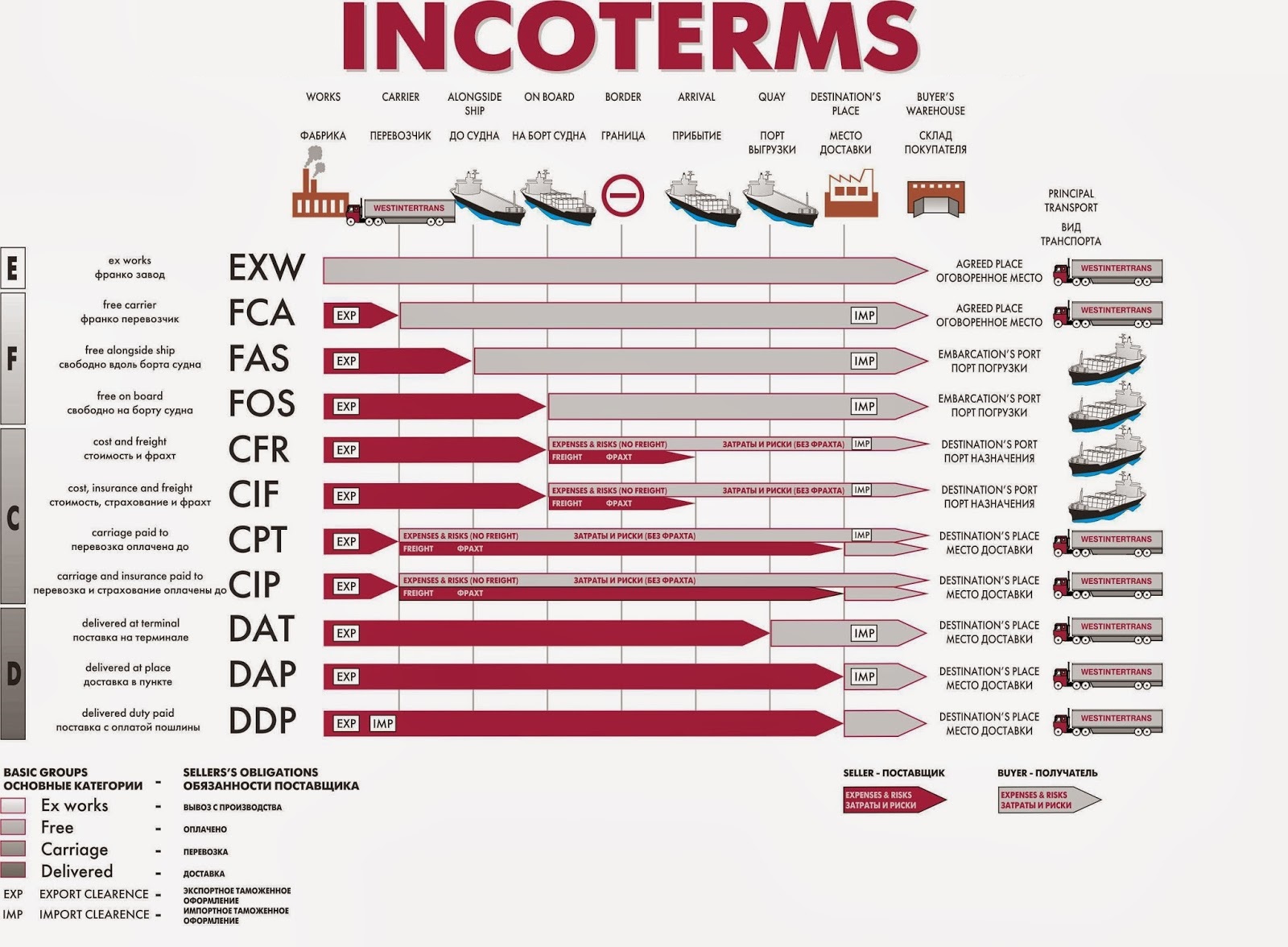 Duties of buyer/seller according to Incoterms®

Explanation of all Incoterms as follows:


The seller makes the goods available at its premises. This term places the maximum obligation on the buyer and minimum obligations on the seller. The Ex Works term is often used when making an initial quotation for the sale of goods without any costs included. EXW means that a seller has the goods ready for collection at his premises (works, factory, warehouse, plant) on the date agreed upon. The buyer pays all transportation costs and also bears the risks for bringing the goods to their final destination. The seller doesnt load the goods on collecting vehicles and doesnt clear them for export. If the seller does load the goods, he does so at buyers risk and cost. If parties wish seller to be responsible for the loading of the goods on departure and to bear the risk and all costs of such loading, this must be made clear by adding explicit wording to this effect in the contract of sale.


The seller pays for carriage. Risk transfers to buyer upon handing goods over to the first carrier.

CIP  Carriage and Insurance Paid to (named place of destination)


The containerized transport/multimodal equivalent of CIF. Seller pays for carriage and insurance to the named destination point, but risk passes when the goods are handed over to the first carrier.


Seller pays for carriage to the terminal, except for costs related to import clearance, and assumes all risks up to the point that the goods are unloaded at the terminal.


Seller pays for carriage to the named place, except for costs related to import clearance, and assumes all risks prior to the point that the goods are ready for unloading by the buyer.


The seller must place the goods alongside the ship at the named port. The seller must clear the goods for export. Suitable only for maritime transport but NOT for multimodal sea transport in containers (see Incoterms, ICC publication 715). This term is typically used for heavy-lift or bulk cargo.

FOB  Free On Board (named port or place of shipment)


The seller must load the goods on board the vessel nominated by the buyer. Cost and risk are divided when the goods are actually on board of the vessel (this rule is new!). The seller must clear the goods for export. The term is applicable for maritime and inland waterway transport only but NOT for multimodal sea transport in containers (see Incoterms, ICC publication 715). This Term has been greatly misused over the last three decades, ever since Incoterms 1980 explained that FCA should be used for container shipments.


Seller must pay the costs and freight to bring the goods to the port of destination. However, risk is transferred to the buyer once the goods are loaded on the vessel (this rule is new!). Maritime transport only and Insurance for the goods is NOT included. This term was formerly known as CNF (C&F).


Exactly the same as CFR except that the seller must in addition procure and pay for the insurance. Maritime transport only.